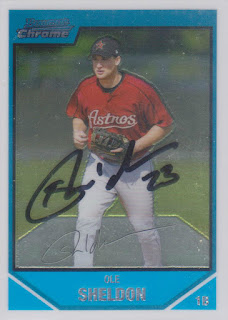 Here is another card that I got signed at a Winguts game. I got this one signed in 2009 while Ole was with the St. Paul Saints.

Ole was drafted by the Astros in the 14th round of the 2004 draft out of Oklahoma. He played in the Astros system for five seasons, reaching as high as AA in 2008. He put up good numbers every season he played after his Rookie ball campaign and never hit below .280 at any other level. In 2006, the year before this card came out, he hit .328 in the South Atlantic League before making the jump to the Carolina League, where he hit .292 the rest of the season.

He then repeated High-A the next year and hit .298 in just 56 games. He must have got hurt that season because that was all of the games he played that year. Nevertheless, he was bumped up to AA for 2008 and he responded with a .282 average with 13 home runs and 55 RBI in the hitter friendly Texas League. After that season, the Astros let Ole walk and he ended up with the Saints in 2009.

He did get sold to the Indians that season and he hit .267 with their High-A team before getting released at the end of the year. That was the end of Ole's career in affiliated ball.

If I remember correctly, Ole's name is pronounced like Ollie.
at 10:51 PM