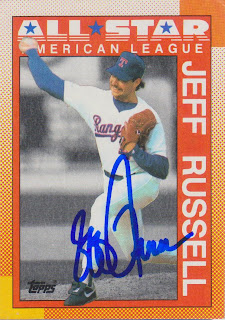 Jeff Russell is the new pitching coach for the American Association's Grand Prairie AirHogs and he was nice enough to sign three cards for me on Opening Day in Wichita last month.

I was pretty excited when I saw that the 'Hogs picked up Russell as their coach. You don't see too many managers/coaches in the American Association that were Major Leaguers, let alone All Stars. Frank White is the first base coach with the Kansas City T-Bones, but he doesn't always travel with the team. For the most part, the coaches are guys that never even played in the big leagues. So, when a former player joins an Am-Ass coaching staff, it is an exciting day for me.

I had actually picked up a Jeff Russell autograph a couple months prior to getting my cards signed at the game. I acquired some extra autographs from Royals Fanfest for set collector Tom of The Angels, In Order. He was nice enough to give me a list of dupes he had sitting around and he let me pick a few. One I picked was Jeff's 1984 Topps card. Had I known that he was coming to the American Association, I might have chose differently.