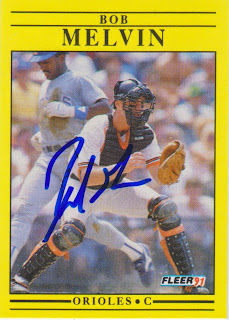 This is the first of three cards that Bob Melvin signed for me in Spring Training. Bob is the manager of the A's and he signed the cards for me before the White Sox game at Camelback Ranch. The other two cards he signed were older than this one, so it may be quite some time before those ever get posted.

Bob played in the Majors for ten seasons with the Tigers, Giants, Orioles, Royals, Red Sox, Yankees, and White Sox. He was mainly a back-up catcher throughout his career as he never started more than 76 games in a season. He hit .233 during his career while smashing 35 home runs and driving in 212 runs.

Bob has a unique signature. For someone who played in the '80s and '90s, he has a signature that is impossible to make out. The autograph example on his Baseball Almanac looks much different than this one. I wonder if that is a bad example or if this one is of the hurried-up ballpark variety.
at 7:58 PM