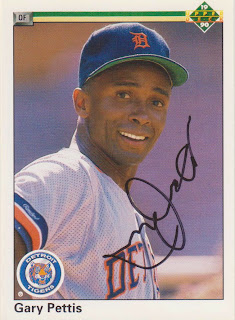 This is one of the strangest signatures that I have ever seen. It looks fairly normal, though crooked, when looking at it. But the strangeness lies in the way it was signed.

I got this card signed before a Royals game last year. The Rangers were in town and I was 'graphing the parking lot early on a Sunday morning. Gary showed up with a couple of other Ranger coaches and he was nice enough to sign one of the three cards I had of him. I handed him my autograph book and he signed this card in what appeared to be a normal way. But, when I saw the signature on the card, I knew that was not the case.

The signature on this card is at an angle, which is not that uncommon. But, if you look at the extreme slant in it, it would appear that Gary was holding the card upside down when he signed it. That was not the case. Gary signed his name upside down. AND, as if that were not enough, he signed it backwards. That's right. Gary held this card as you see it now and then signed it left to right, upside down and backwards.

Gary played in the Majors for eleven seasons with the Angels, Rangers, Tigers, and Padres. He was a speedy light-hitting outfielder with a good glove. He hit .236 for his career with 21 home runs, 259 RBI, 568 runs, and 354 stolen bases. His speed never got him to an All Star Game, but he did bring home five Gold Gloves for his defensive mastery of center field.

Last night, the UC Irvine Anteaters knocked off the number one team in the nation, Oregon State, to advance to the Super Regionals. The Super Regional field is set and I will post an update later today.
at 11:01 AM

I remember an Oriole or Orioles minor leaguer that seemed to sign in a backwards type manner at some point in recent years. Can't remember who off the top of my head.
Thanks for sharing the story!