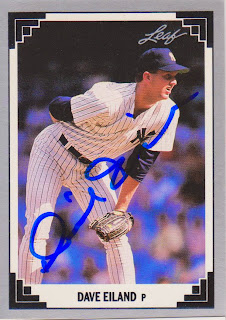 Back to back Yankee posts? Considering that I have only posted twenty-eight Yankee cards on this blog, that is a rare feat. I once went two years between posting a card of a Yankee. And it's not like I try to avoid getting Yankee cards signed, because I take whatever I can get. It's just that I do not have much luck getting 'graphs from guys that played in the Bronx. I did add a new one Tuesday, though. Mr. Don Mattingly was nice enough to sign one item for everyone when he showed up to Kauffman Stadium. That was definitely the highlight of the day.

Anyways, on to this card. This card was signed by the Royals pitching coach prior to a game in 2012. Speaking of the Yankees, they were the visiting team that day. It was a Sunday day game, and I knew that the teams would not be taking batting practice, so I only took cards of pitchers. Unfortunately, it was kind of wet that day, so even the pitchers stayed off the field (pretty sure that was the same series Mariano Rivera got hurt shagging). Therefore, the cards that Dave signed for me were the only autographs that I got that day. But, at least I did not come home empty handed.

I really like the way this card came out. For some reason, I like it when a border matches team colors. While the Yankees are technically navy, it is such a dark hue that it looks black most of the time.

Tune back in later today and I will have the final results up from the College World Series Contest.
at 10:48 AM