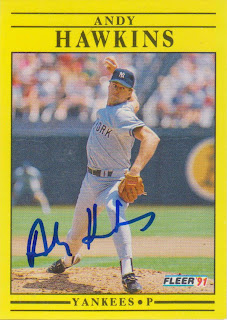 This is the second of three cards that Andy Hawkins signed for me last season. Andy is the bullpen coach of the Rangers and I was able to get the cards signed outside of Kauffman Stadium when he arrived at the ballpark. The first card can be seen here.

Speaking of getting cards signed outside the ballpark, the Dodgers are in town this week and I will be heading up tomorrow to get my 'graph on. With all the big name players, coaches, and commentators on the club, I am hoping to come home with some decent signatures. I am really looking forward to it!

Andy pitched in the Majors for ten seasons with the Yankees, Padres, and A's. He was 84-91 during his career with a 4.22 ERA. His best season was with San Diego in 1985. That year, he was 18-8 with 3.15 ERA. That was his first of four double digit winning seasons for his career. The last one came with the Yankees in 1989 when he went 15-15. That was the third straight year that he hit double digit losses. That streak continued the following season, as well.

In case you missed it, and judging by the attendance you have, Virginia and Vanderbilt are squaring off in the first game of a best of three series tonight for the College World Series championship. If Virginia wins the series, Wilson wins the CWS contest. If Vanderbilt wins, Need More Cardboard wins.
at 3:04 PM