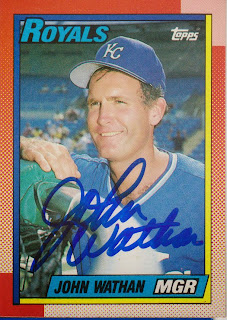 Here is another John Wathan autograph from the collection. This one was obtained at Royals Fanfest this last winter. By my count, that is the eleventh different card of John that I have posted on here. It is a classic managerial shot of him standing by the cage during batting picture. Unfortunately, he is not wearing his batting helmet.

John managed the Royals for parts of five seasons. His club finished with two winning seasons and even went 92-70 in 1989. 92 wins would have nabbed them the AL East. But, instead, they finished seven games back of the A's in the West. The team slipped to 75-86 the following year and John was released from his duties after a 15-22 start in 1991. John was later an interim manager for the Angels in 1992 when Buck Rodgers had to take a leave of absence.

Today, John scouts for the Royals and can be seen in the stands at Kauffman Stadium from time to time.

It has been a crazy weekend for the college baseball regionals. There have been many upsets and a few up-and-coming programs advancing out of the first round. There is one final game still going on. But, the other fifteen teams are known and here are how the Super Regionals are looking. The Super Regionals are a two out of three series that starts Friday. The first number is the seed and the number in parentheses is how many contestants picked that team.

Looks like no one is getting any points out of slot five.