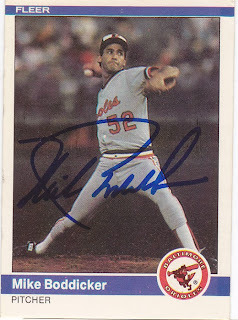 Here is a card that I got signed at Royals Fanfest last year. Mike has only been to two Fanfests and I was able to get cards signed by him both times.

This card looks like it might have been taken at night, or at least in the evening. That is kind of unusual for mid-80's cards, so I asked Mike if the photo was taken during the World Series in 1983. He stared at the card for a second and then told me that he had no idea.

Speaking of Fanfest, it is right around the corner. Even with my more than usual posts this month, I am probably going to be posting cards from this year's and last year's fanfest at the same time.

That can't be a shot from the '83 Series. I was there when Boddicker pitched Game Two in Baltimore. He didn't get to pitch in Philly and the card shows him in a road uni.

Same thing applied to the ALCS. MB pitched once, at home in Game Two.

Thanks for saving me from a tiny bit of research. That's cool you were at the Series that year. I'm a little jealous.