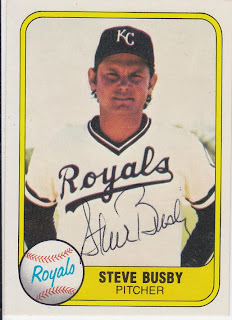 After eight months and ninety straight posts of 1981 Donruss, here is something a little different. I am going from my 175th '81 Donruss card to something that has never been posted on here. That is right. This is my first ever signed card from the '81 Fleer set. For whatever reason, I just never got any cards from this set. I doubt I ever bought a pack of this stuff and the few cards I do have were just acquired along the way. Take this card for instance. This card was sent to me by a blogger a few years back just because I am a Royals fan.

Unfortunately, Steve Busby's short career was winding down in 1980. Because of that, he was not included in the 1981 Donruss or Topps set. This was Steve's final card and it seemed like a good one for him to sign for me. I sent this card to Steve last November and I had it back in about a week.

I wrote to Steve because he is in the Royals Hall of Fame and I do not have his autograph.

Steve still works in baseball today and can be heard on Ranger television broadcasts as the color man.
at 10:40 AM

Nice one. I hear him on the Rangers broadcasts quite frequently.