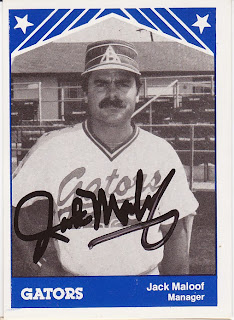 Here is an old minor league card that my girlfriend got signed for me at a Spring Training this past spring. Jack was the hitting coach for the Royals and she was able to get it signed after the game we attended. Jack saw this card and said "now that is an old picture". It is always cool to get a reaction when you get an unusual card signed.

I like this card because it shows a team that I had never heard of before- the Beaumont Golden Gators. The Gators were the AA team for the Padres in the Texas League. They only lasted for four seasons before moving to Wichita. At least they had a cool jersey. I wish I could say the same about their hat.
at 12:16 PM