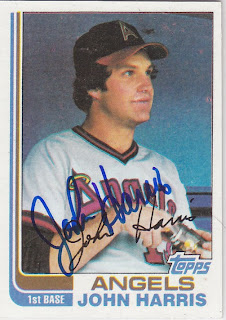 Here is the fourth and final card of John Harris that I have to post. This one, like the last two, was signed at a Wingnut game in 2011 while John was managing the Amarillo Sox.

John's ascent to the Majors was fairly quick as he made his debut at the very end of his third professional season. Unfortunately, the Angles had some guy named Rod Carew manning first base at that time and it was hard for John to get any decent playing time. Nevertheless, he kept playing AAA ball through the 1985 season, but he never made it back to the Major Leagues.

Maybe I am a little bit strange, but John looks like a young Steve Guttenberg in this photo.
at 7:38 PM