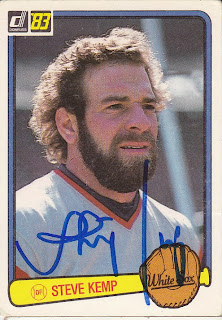 In honor of "No-Shave November", here is a signed bearded card of Steve Kemp. As far as I can tell, Steve only sported a beard during the 1982 season. All of his cards from '83 show him in a beard, as does his '82 Traded card. Steve was signed as a free agent by the Yankees prior to the '83 season and, because of the Boss's (is that even spelled right?) no facial hair policy, the beard had to go. It hasn't been seen since.

I have had this card for some time and I have no clue how I came into owning it. But, when I found that Steve was an active signer and I decided to send him an '81 Donruss, I just knew that I had to send this card to get signed, too.