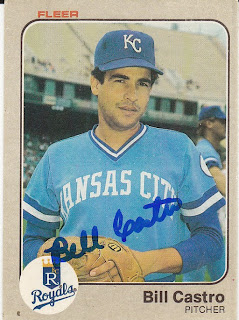 Here is the second card that Bill Castro signed for me last year. I sent the cards to Baltimore while he was coaching with the O's and I had them back a few months later when the season was done. You can see the first card I posted here.

When I posted that first card, Bill was interviewing for the O's pitching coach position. He was previously the interim pitching coach and the bullpen coach before that. Well, it seems that he did not get the job as the club now lists Dave Wallace as their pitching coach. They also got a new bullpen coach, as well, so Bill is now looking for a new job. He was offered a scouting position with the club, but he decided to look for an on-field job elsewhere.

Bill's pitching career spanned ten seasons with the Brewers, Yankees, and Royals. The majority of that time was spent in Milwaukee and Bill racked up a 31-26 record with 45 saves and a 3.33 ERA for his career.

I now have three cards from this set signed and they all just happen to be Royals. I had a card signed by a Dodger at one point, but that card quickly got flipped to the '83 Fleer Project for a signed '81 Donruss card.
at 9:21 PM