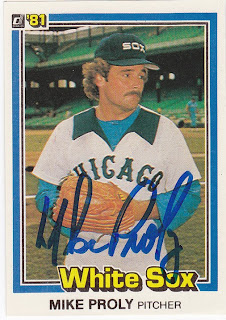 Here it is. This is the last card from the '81 Donruss set that I will be posting for some time. It has been a long run at the set and it is finally time to move on to something else. I am gradually working my way up to my 2007 signed cards. I have a ways to go, though, and it might be a couple of years before another '81 Donruss card graces this blog. But, there will be more at some point.

This is the Mike Proly card that I got signed through the mail in February. It took Mike just eight days to get this card back to me.

Mike pitched in the Major Leagues for seven seasons with the Cardinals, White Sox, Phillies, and Cubs. He pitched primarily out of the 'pen and had his best success during his tenure with the Sox. In those three seasons, he racked up 19 of his 22 career saves including a career high of 9 in 1979. For his career, Mike was 22-29 with a 3.23 ERA.

Since I have made it to 175 signed cards from this set, I am officially raising the goal to 200. It shouldn't be that hard to achieve. It is just going to depend on how badly I want to start sending out some letters again. I really haven't sent out a great deal of TTMs since the season started as they are not as fun as getting the cards signed in person and they are even less fun to write about than an in-person signature. That is especially true when you are posting about a hundred TTMs straight without much of a break.

175. That's quite an accomplishment. Lookin' forward to the next thing up on your list.