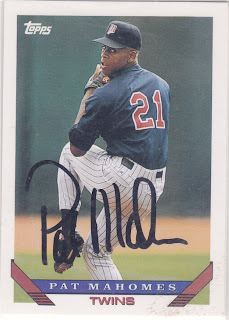 Here is the third and final Pat Mahomes card that I got signed last year at the Grand Prairie AirHogs game (you can see the first one here and the second here). Pat was the starting pitcher of the Sioux Falls Canaries in game one of the American Association championship. I tried to get him to sign before the game, but he was going through an unusual pregame ritual in the outfield that consisted of some light wind sprints and some weird hand movements (like a mixture of yoga and jogging). He just ignored my one attempt to get him to sign when I intercepted him on the way to the bullpen. But after the game, he came right over to me without me even asking and signed all three cards I had.

The American Association is one of the newer independent leagues and doesn't have too many former big league players. Pat was the only one on the two teams in the championships. The reason why I bring that up is because I would assume Pat would the main guy that the players would look up to. Assuming that, there is one thing that I was disappointed in by Pat Mahomes and that was his appearance. The pants he wore were so wrinkled that it looked like he slept in them. I don't know if he just threw them in his bag before he got on the bus or what. But I was sure expecting a little bit more from a player that has appeared in over 300 Major League games. Other than that, he pitched a great game and seemed like a nice guy.
at 3:58 PM

Pat Mahomes was cool a few years ago when he played in the Atlantic League. He signed a bunch of cards for me and the first autograph was always as nice as the last.

I'm not sure what the salary/living conditions are like for players in the American Association. In the Atlantic League, most guys are making $2,000 or less per month and are living in long-term hotels. Slightly rumpled is the norm, I'm afraid.

I'm sure the AA players are making slightly less than the AL players (that is just an assumption based on the talent of the two leagues). But, I went to three AA games last year in three different parks and Pat's pants were by far the worst that I saw. I usually don't notice that type of thing, but his sure did stand out.