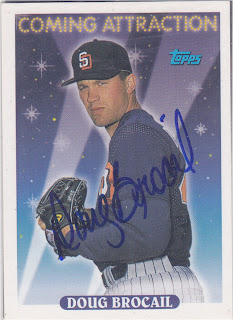 Here is a card of the current Astro, Doug Brocail. This is the first current player that I have posted on here since I posted the Cliff Floyd autograph back in January.

This card is another one given to me by Rod, of Padrographs. It's pretty cool that I have Doug's rookie card signed since I got another autograph from him last month in Houston. So I now have a 1993 card and a 2008 card signed by him. That is quite a gap.

When I got Doug's autograph in person, it was the day of Astros Fanfest at Minute Maid Park. Most of the players and coaches had to be at certain spots around the ballpark to sign for the fans. But, Doug and Tim Byrdek weren't on the list of players to sign, so they signed for all of the fans that didn't want to spend money getting autographs. They both started by the foul pole and worked there way to the dugout signing for anyone that was interested. There were both out there for at least 45 minutes. It's always good to see Major Leaguers doing that.

I guess Topps decided to drop the Future Star subset in 1993 to go with the Coming Attraction one instead. I can't remember if this was the first year of this or not, but I know that the Future Stars were back in 1994.
at 2:06 PM