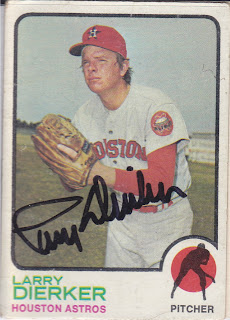 I got this card signed last month when I went to Astros Fanfest. Larry was in the first group of alumni to sign that day. While most of the alums were wearing polos and slacks, Larry was wearing a Hawaiian shirt, shorts, and flip-flops. I thought that was pretty cool.

Not being from Texas or an Astros fan, I knew very little about him going into the signing. But, when I got up to the autograph table, Larry was very nice. He saw my autograph book that I had and said "wow, you're pretty organised". He went ahead and signed both of my cards. As soon as he was done signing my second card, he looks up at me and shakes my hand. Usually, if you want to shake a player's hand, you offer your hand first. That was not the case with Larry as he offered his first- very classy.

Also, I only got seven cards autographed yesterday. Actually, I got eight since I bought an $8 pack of Tri-Star and got another autograph in that pack (I only bought the back because they threw in a Eric Hosmer card, the Royals number one pick last year). Anyway, I think my dog might be psychic. 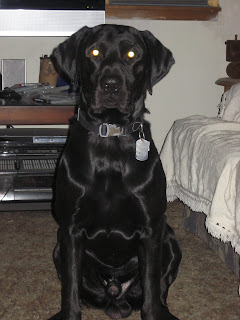 Your dog is rad.

I certainly appreciate that, Moe!

Congrats! That's a nice looking card to have signed.

I met Larry back in January 1991; I didn't have a card but he did sign my Astrofest ticket stub when I ran into him in a hallway. I met him again a couple years later and got a picture signed. I did a TTM a few years ago and had two cards signed (1970 and 1976). He was always very polite about signing when I saw him in person.