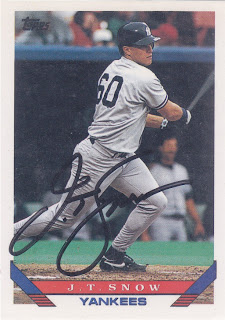 Here is a autograph from a six-time Gold Glove winner, J.T. Snow. I got this card signed through the mail around 1993 or '94. J.T. was just an up-and-coming rookie when I got this card signed, but that was half the fun when going for TTMs in that era. There wasn't any websites available that told you who signed and who didn't. Every once in a while, Beckett would mention a player that did sign TTM. Other, than that, you were on your own and you took your chances. More often than not, your chances were much better with the rookies fresh up from the minors than with anybody else. Sure, you might end up with a few nobodies twenty years later. But when you get a couple of players that ended up with a fifteen-plus year career, it is all worth it.

I was just looking at his stats and it says that he played in one game last year with the Giants. I wasn't aware of that, so I went over to Wikipedia and it said that he signed a one day contract with them last September so that he could retire as a Giant. He was placed in the starting lineup, but was replaced before the first pitch. I am kind of surprised that Baseball Almanac even lists that as a game played. I am also surprised that I do not recall hearing about that. Usually the one day contracts are done in Spring Training. It is pretty cool that he got to take the field and even throw some ground balls while the pitcher was warming up. That was a classy act on the part of the Giants.

For a few years, this was my only Yankees card that I had had signed. I had a Yankees minor league card signed, but not one that actually said Yankees on the front. And this was from a time when the Yanks had been a bad club for awhile, before they became the "Evil Empire". I guess sub-consciously, I knew where they were heading.

I know that it is almost impossible to tell, but I swear that is Don Mattingly standing up in the background.
at 8:07 AM