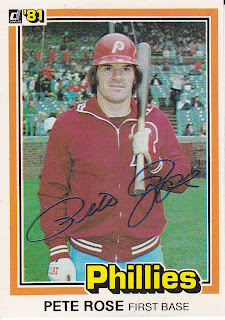 I got this card signed through the mail on Thursday. The postman actually delivered the envelope to the house two doors down. Luckily, they came knocking at the door a few hours later and gave it to me. As soon as I saw the Las Vegas postmark, I knew it was Pete. It only took two weeks to get this card back.

To be honest, I am really surprised that Pete signs throught the mail for free. It always seemed to me that he was trying to make a buck doing shows and signings. So, when I first saw Pete listed on The Bench, I was a little skeptical. Then Dan, of OMGautos, reported a success on his blog and was nice enough to provide the address he used to get. This card and another one were in the mail shortly afterwards.

Today, I was watching part of game three of the 1980 NLCS between the Phillies and Astros on the MLB Network. One of the first things I thought about when I saw the lineups was that I had autographs from five players that were starting. Then I started to think about it and I realized that I had '81 Donruss cards signed by all five of those guys. I thought that was kind of neat since the pictures on those cards were probably taken in 1980. Anyway, the five players were Pete Rose, Terry Puhl, Luis Pujols, and Larry Bowa and Enos Cabell (they will both be posted tomorrow).
at 1:12 PM

Almost as cool: the 1980 NLCS is playing on MLB Network. I always miss those replayed games.

There is a notable play in one of those games in which there is much dispute over whether an Astro caught the ball or not (my mind is fuzzy on who it is), but they replayed that catch during the game for what seems like forever. It was my first memory of TV using multiple upon multiple replays for a single play.

Good memory. Do you remember if the umpire got the call right?

No I don't remember. I think the whole thing was it was impossible to tell whether the player caught it or trapped it, even with the closeups and whatever kind of technology they had at the time.

Wow! I got two sigs in the mail today (Incaviglia and Warwick from the Colt .45s) but that is nothing compared to this. I grew up in the '70s and '80s watching Pete and always admired the man.

Congratulations Zach!!! I am going to have to try for him again.

Awesome autograph from Pete! Congrats on the great return. Glad I could help you out with that one.

I have one more '87 Topps card for him to sign for my set. Since he hooked me up via the mail, and all you guys are getting returns as well, I'm much more inclined to actually PAY him for an autograph next time he's in cincinnati signing.

I think it's funny that we were all watching that NLCS game over the weekend!