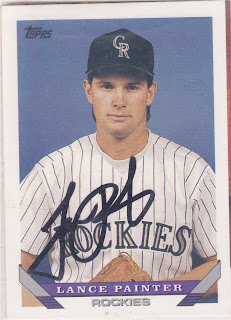 This is the second and final Lance Painter card that I have on here (here's the first). I got them signed in Rancho Cucamonga, California last year while Lance was the pitching coach for High Desert. I could only find two cards of him before I left for the trip, so no trifecta from this guy. This year, Lance is the pitching coach for the Clinton LumberKings.

Since this is the last card that I have to show from my Rancho Cucamonga visit, I figured that I would post some pictures of the ballpark. If there is one thing that I like better than autographs, it would be visiting new ballparks.

Here is a picture of the exterior of the Epicenter (yes, that is the actual name of the ballpark). It is one of the most unique exteriors that I have seen. It almost looks like an office building or a mall or something. It was hard to get a decent picture of it since there were three softball fields surrounding it. 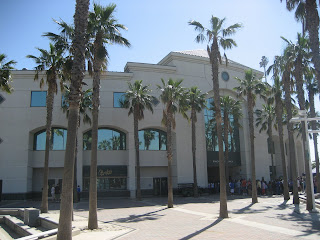 It appeared that there should have been a nice backdrop behind the leftfield fence, but the smog was so think that day that you could barely see the nearby mountains. 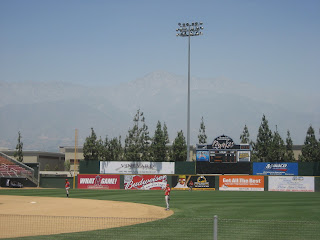