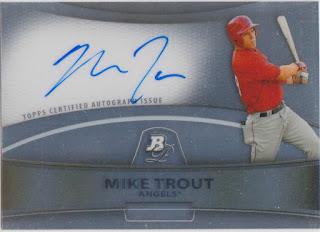 Here is the best pull of my life! I had the pleasure of pulling this out of a pack in 2010 that I purchased at Target. At the time, Mike was the top rated prospect in baseball, so I was pretty happy to get this card. Ten years, eight All Star teams, and three MVPs has really amped up my appreciation for this card and I doubt that I will ever pull another autograph of a generational player again.

Mike's signature looks a lot different now than it did when he signed this card. He now has more loops and he doesn't lift his pen between his first and last name. He added his number to his signature for a bit, but that has been dropped off. Yesterday, I stumbled upon a Twitter post that chronicles the evolution of Mike's signature.

I have had the pleasure to see Mike play seven times. One of those was a Spring Training game in Tempe and one was at Safeco Field. The rest all occurred at Kauffman Stadium. Of the five games at The K, three were regular season games, one was the 2012 All Star Game, and one was the last postseason game that Mike appeared in. In case you aren't sure, that playoff game was back in 2014.
at 12:41 PM

Congratulations! That's a sweet card! I've seen Trout play at least once... but it's probably been at least two or three times. I've always wanted to pick up a Trout autograph... but unless Topps starts flooding the hobby with his signature and they start becoming more reasonable... then it's not looking very likely.