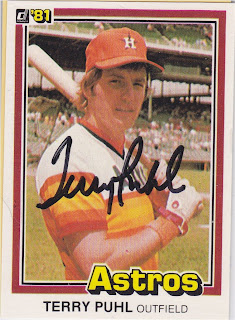 Here is another card that I was able to get signed at Astros Fanfest. Terry, like all of the 'Stros alum, signed all three of my cards.

I had always thought that Terry was a lifelong Astro. But, after looking at his stats, I discovered that he played his final season in Kansas City. He only got into 15 games with the Royals and went 4-18 with 3 walks and 3 RBI.

While '81 Donruss is not known for its photography, this picture of Terry looks a little more fuzzy than the average '81 Donruss. Maybe it is just the shadow over his face that is giving it that look.

I'm going to St. Paul Saints/Wichita Wingnuts game tonight. I was hoping to get Craig Brazell's autograph. But, the Saints sold him to the Hanshin Tigers of Japan's Central League. I guess that Kerry Lightenberg will be the main one tonight. The Saints are pitching last years 46th pick in the draft, Tanner Scheppers. It will be interesting to see how he does.
at 3:31 PM

Good luck at the game tonight.

Nice! Puhl is one that I don't have yet.

I was talking to my cousin's husband on Memorial Day and he mentioned that he worked at a sports card shop when he was 15. Terry was one of the players that he remembered that was brought in to sign back then (which I assume to be early 90's).