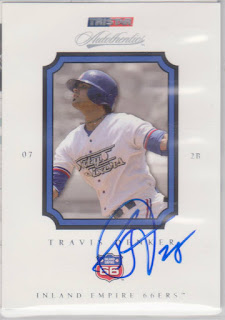 Here is the second card that I have posted on here of Travis Denker. This one was obtained late in the 2014 season at a Wingnuts game. Travis was playing for Laredo at the time. I posted the last card this past April and it can be seen here.

When I posted that last card, Travis was playing in Mexico. He played for the Reynosa Broncos all season and hit .264 with 10 home runs and 70 RBI. After the season in Mexico was over, he rejoined Laredo and helped them down the stretch. He played in 20 games for them and hit .361 with 4 home runs and 15 RBI. He helped the Lemurs clinch the Am-Ass wild card spot en route to an eventual league championship.

The two cards from this set that I posted are the only two I own. Based off of the two cards, I am not a big fan of this set. There is just way too much border on these cards and not enough picture. I get that the set was meant for the randomly inserted autographs, but they could have mixed up the look of the autos and the base cards better. As far as I can tell, the only difference between the two, besides that signature, is the lack of a team logo on the bottom of the signed card. That is where the signature is. Either way, this set could have done a little better. But, that was in Tristar's early years while it was trying to figure everything out. Too bad they did not last long enough to figure it out.

On a side note, right now you can pick up a Nick Adenhart autograph from this set on COMC for about four bucks.
at 10:18 PM