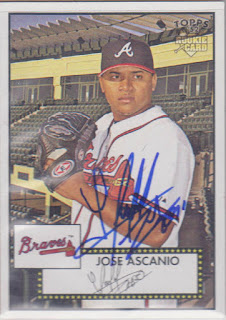 Here is a card that was given to me by Paul, from Paul's Random Stuff. I have no idea where he got it signed, but I do know that he had quite a few of them signed. At one point, I believe that I had three of these cards that were signed and they all came from Paul in different trade packs. I figured that Paul got them signed at an Atlantic League game at some point, but Jose never played in the Atlantic League. He never played in the Eastern League either, so my best guess is that Paul got this card signed through the mail.

Jose played in the Majors for parts of four seasons with three different teams- the Braves, Cubs, and Pirates. He was used exclusively out of the bullpen and went 1-3 with a 5.28 ERA over 43 games that spanned 46 innings. He struck out 41 and walked 21. His best season was with the Cubs in 2009. That year, he pitched 15.1 innings and posted a 3.52 ERA while striking out 18. At the trade deadline that season, he was shipped to Pittsburgh with Josh Harrison and Kevin Hart for Tom Gorzelanny and John Grabow. Even though he did not have much success with the Pirates, I think the team fared well in that trade.

Like yesterday's post of Edwin Bellorin, it appears that this card is the only one that Jose ever got from his time in the Major Leagues.
at 9:28 AM

I didn't realize I'd sent you so many copies of the card over the years.

At one point, I was aiming to collect the 2007 Topps '52 Rookies as a signed set, so I wrote to just about everybody that was in it. Some responded, some didn't. Jose Ascanio was the only one who stuffed my return envelope with as many signed copies of his card as he could fit in there. I wouldn't be surprised if I still have one or two extras left.

That is funny. How far along on the set did you get?

Better than a third of the way through, maybe close to half. It stopped being fun when most of the the players I still needed fell into the "unaffordable/unapproachable" star or "are you still in organized baseball?" categories by 2009 or so.