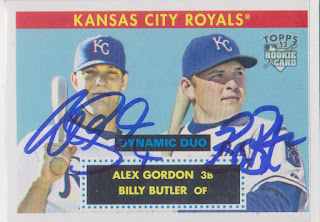 Alex Gordon signed this card first when I was at a Twins game in 2009. I went up there for the final regular season series in the Metrodome and did a little 'graphing during Royals batting practice. To my surprise, Alex signed that day and got this card started. Then, about four months later, my dad was able to finish it off by getting Billy at Royals Fanfest. It could not have worked out much better than that.

While I am not sure how many cards I have signed by more than one player, I know that it is not a lot. It has got to be under ten. But, it is pretty awesome that this is the second one that my dad was able to finish off for me. Earlier in that 2009 season, he was able to add Kevin Seitzer's signature to his '87 Fleer rookie card. Even though he had an easier time getting Butler at Fanfest, I still appreciate it just the same.

I just posted Billy's card from this set a few days ago. It is amazing how much different the two signatures look on the two cards. That just goes to show the difference between the rushed ballpark sig and the more relaxed signing atmosphere sig. Plus, when the first one was signed, it was in my book. My book holds three cards and I'm willing to bet the other two cards were not horizontal cards. So, there was probably an issue with him rotating the book, too.

It is funny looking at this card and realizing that Alex broke into the Majors as a third baseman and Billy as an outfielder.
at 9:41 AM

Always nice to finish off a multi-player card!