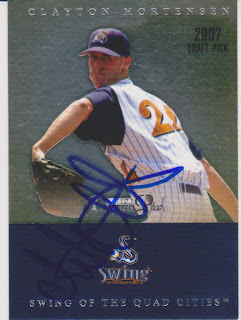 Here is a card of Clayton Mortensen that I got signed at an Omaha Storm Chasers game last season. Clayton was pitching for the Chasers at the time and he was nice enough to sign two cards for me prior to the game starting.

This card would have came out looking better if Clayton hadn't signed over the dark area on the bottom of the card. But, he also signed a horizontal card that was with this one, so he must have been tilted and did not feel like coming out of it. Hence the sideways signature.
at 8:52 PM