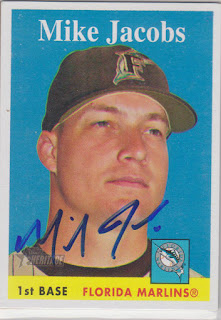 There is nothing quite like a card that looks like a 1958 Florida Marlins card to bring back a bit of nostalgia. While I love the Topps Heritage sets because of the cardstock and how well they come out looking signed, there are obviously a few drawbacks. But, to Topps credit, I think this card looks good. If there was a team in the 1950s sporting teal on their uniform, their '58 Topps card probably would have looked pretty similar to this.

This is the third card of Mike Jacobs that I have posted on here. The first one was posted over four years ago and the last one was posted in September. The signature on this card was obtained at Royals Fanfest in 2009.

To my surprise, Mike spent all of last season playing in Mexico. I know he hasn't appeared in a Major League game since 2012, but I figured someone would want a guy on their AAA team that could mash right-handed pitching. In 2014, Mike hit .299 with 19 home runs and 99 RBI for the D-Backs top minor league affiliate.

Though Mike only played with the Royals for one season, I really liked him. He might have struggled against lefties, but he was a great guy that was always willing to sign for fans. For me, I will take a .228 hitter with some pop, that is fan-friendly, over a .300 hitter, that is a dick, any day.
at 9:16 AM