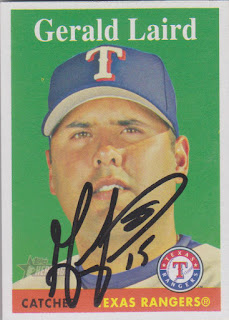 Here is the second card that Gerald signed for me in 2008. Gerald was playing for the Rangers at the time and he signed for me during bating practice at Kauffman Stadium. I posted the first card back in October and it can be seen here.

2008 was my first year getting cards signed at ballparks, so I was a rookie then who mainly used black Sharpies. The black did not turn out that good on Gerald's '07 Topps card, but it sure looks good on this one. Blue would have looked good, too, but it's a little late for that.

Gerald spent two seasons with Detroit after being traded from the Rangers prior to the 2009 season. Playing in a career-high 135 games that season, Gerald hit just .225 with 4 home runs and 33 RBI. He saw less playing time the next season while hitting .207 with 5 homers and 25 RBI.

He joined St. Louis for the 2011 season as Yadier Molina's backup before rejoining the Tigers in 2012. He hit .282 in his return to Motown, the second best average he put up for his career.
at 11:44 AM