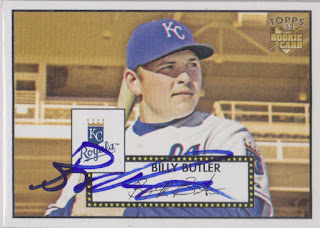 Here is the second card of Billy Butler that I have posted on here. I posted a minor league relic card of him nine months ago and that one can be seen here. I got this card signed by Billy by the Royals parking lot after a game in 2008.

Billy was drafted by the Royals in the first round of the 2004 draft. He signed quickly and started raking minor league pitching immediately. He rose up the ladder about as fast as you can and by 2007, he was was in AAA. In 57 AAA games, Billy hit .291 (his worst average at any level to that point) with 10 doubles, 13 home runs, and 46 RBI. The Royals offense was sputtering, like they did most years that decade, and the brass had no choice but to bring the 21-year old up.

The one problem with Billy in the minor leagues was not his hitting. The Royals just could not find a position for him to man in the field. He was originally drafted as a third baseman and he lasted at that position for less than two seasons. Over 90 games at third, he committed 30 errors. So, the Royals moved him to the outfield and his fielding percentage got better with the lack of chances. But, it still wasn't pretty. By the time he got to Omaha in 2007, he had started playing some first base to mix in with left field. But, before he could get comfortable at any position, he got called up to the Majors and made his Major League debut in left field.

Luckily, he only played in six Major League games in left because he was atrocious. Watching him out there, you had no idea that he played that position in 165 minor league games. You just assumed he was out there for the very first time. He just made bad reads and took bad routes. The Royals then tried him at first base a bit and it was slightly less painful to watch. Eventually, he settled into the DH role, right where he belonged.

Even though he is almost exclusively a DH, Billy worked at first base every chance he had. Though he doesn't get many chances to man the position, he has worked his way up to being an average first baseman. And that is a huge improvement over his first season in the Majors.

Does my blog look different to any of you? Whenever I go directly to it, only the posts appear. There are no list of labels, no blog list, and no archive. My settings are set up fine and it shows up in my preview, but I do not see that stuff when I go to my page directly. Is anyone else having this problem? Any feedback would be appreciated.

I still see your right-hand sidebar using Chrome on a Windows PC.