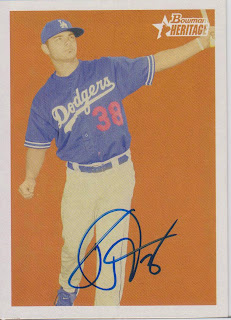 This is a card that I got signed at a Wichita Wingnuts game last summer while Travis Denker was playing for the Laredo Lemurs. Since Wichita got moved to the South Division last year, I think I saw Laredo play three times. Because of that, I was able to get Travis to sign at a couple of games and I even ended up with one of his bats after the third game.

Travis was originally drafted by the Dodgers out of high school in the 21st round of the 2003 draft. In 2005, playing in the South Atlantic League, Travis had a great season where he hit .310 with 23 home runs. Because of that season, he got this card that I was able to get signed. He struggled a bit over the next few seasons and would not reach AA until 2008. By that time, he was with the Giants after being traded for Mark Sweeney the previous season.

Though he hit just .184 in 25 AA games, he got bumped up to AAA. His time there was short-lived before being called up to the Majors for two months that summer. He got into 24 games with the Giants and hit .243 with a home run and 3 RBI. He then finished the season at AAA. To date, that is the only big league experience for him.

Travis is currently playing in Mexico. I hope that he ends up back in the Am-Ass at some point this year so that I can get my bat signed by him.

That blue really pops on this card. Nice one Z!

Those cards look so much better with an autograph -- and given the kind of collector I am, I don't say that much.