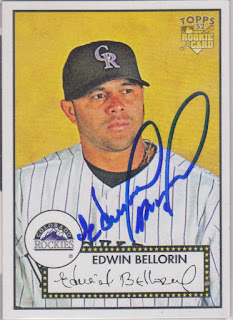 Here is the second card of Edwin Bellorin that I got signed at a Wichita Wingnuts game in 2011. On that day, I missed him coming out onto the field and ended up getting him by the clubhouses in left field after the game. Out there, there is a chain link fence separating fans from the clubhouse and the fence is probably at least eight feet tall. In order to get my cards to Ed, I ended up shoving them through a crevice at the bottom of the fence. Though it wasn't ideal, it got the job done.

The first card of Ed can be seen here.

Edwin's Major League service time spanned eight games over three seasons. Over those games, he started three, pinch hit twice, and was a defensive replacement in the other three. In those games, he had three hits in thirteen at-bats with one run and a walk and a strikeout. The Rockies were 6-2 in the games that Edwin played in.

In 2007, Edwin got into just three games and he had two at-bats. But, thanks to this set, he has a card commemorating him playing in the big leagues. That is why I love the idea of this set. Now if only they did not repeat the design from 2006.
at 8:31 AM