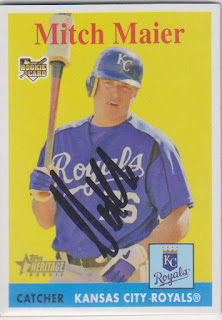 Mitch last played in the Major Leagues in 2012 and played professionally through 2014, though that season was spent at AA. Last season, he transitioned into coaching with the Royals. Though he didn't have an official title, he bounced back and forth between the AA and AAA clubs helping them with hitting, outfield positioning, and coaching first base. I would assume he would be doing the same thing this year, but I saw a weird post on MLB Trade Rumors last month. On a minor league transactions post, it said that Mitch and the Royals have once again united and that it's not clear what role he will have as he coached last year, even though he still expressed a desire to play. It was a vague post that created more questions than answers. But, I would be willing to bet that he continues on the coaching path.

I think it is pretty funny that Topps lists Mitch's position as catcher. Originally drafted as a catcher in 2003, he gave up the position after one minor league season. The only positions Mitch ever saw time at in the Majors was outfield, first, and pitcher. He only pitched two innings and played first for two innings.
at 10:05 AM