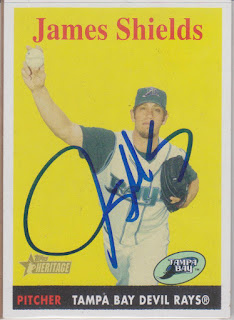 Here is a card that I got signed before a Royals day game in 2010 while James was still with Tampa Bay. It just happened to be the Royals annual Bark in the Park game where fans are encouraged to bring their dogs. At Kauffman Stadium, the fans get to parade their pooches around the warning track prior to the start of the game. James and a few other Rays pitchers were on the field getting their work in when the parade started. Once that happened, they were essentially stuck out there, so they just watched the show like everyone else. Afterwards, James came over to sign and I asked him if the Rays did a Bark in the Park. He wasn't sure, but he knew that there was rays there everyday, referring to the ray petting tank at Tropicana Field.

James pitched for Tampa Bay for seven seasons, going 87-73 for them along the way with a 3.89 ERA. He hit double digit wins for them every season except his first one and made his lone All Star team as a Ray in 2011. That season, he logged 249.1 innings while tossing 11 complete games with 4 shutouts. He struck out a career-high 225 batters while going 16-12 with a 2.82 ERA, also a career best.

Prior to the 2013 season, James was dealt to Kansas City with Wade Davis and Elliot Johnson for Wil Myers, Mike Montgomery, and Jake Odorizzi. Considering that Wade Davis is the dominant beast that he is, I would say that the Royals fared much better in that trade.

Unfortunately, my time of nearly posting daily has come to an end. Tomorrow, it is back to the bump and grind of the 48 hour work week. I really enjoyed having the time to pump out a bunch of posts over the past five weeks, but that will be grinding to a halt. Hopefully, I will be able to get two to three posts done in a week. We will just have to wait and see.
at 5:38 PM

I've enjoyed the constant autograph postings. Keep hoping that one day we'll both end up posting the same person.
As someone who lives 5 miles from the Rays stadium, I can confirm that they do have an annual "bring your dog to the park" promotion. Though, it didn't start until 2012, 2 years after you asked James about it.

Good luck with the return of the 48-hour work weeks... here's hoping you are able to work in a little bit of time for blogging.

That would be cool, Dan, if that ever happens.