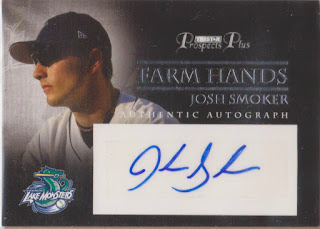 When I was pondering this post a couple of days ago, I thought it was going to be an short and easy one. I have had this card for a while and I was pretty sure that Josh had not played in the Majors yet and I was right. Since this card is about nine years old, I just assumed that Josh was out of baseball since he hasn't made it to the top yet. Turns out I was wrong there. Though he has yet to play ball above the AA level, and has only pitched in 21 innings of AA ball, Josh is still going strong. In fact, he is currently rated as the twenty-fourth best prospect in the Mets system.

A former first round pick by the Nationals, Josh pitched in their system for six seasons. He never got above high-A and was plagued with injuries that cost him much of the 2012 season. The Nats released him and he missed all of 2013. He pitched in the Frontier League in 2014 and did good enough to get signed by the Mets last season. With them, he pitched at three level, culminating in AA, and dominated at every stop. He pitched in 49 innings last season and went 3-0 with 6 saves, a 3.12 ERA, and 60 strikeouts. Not too bad for a guy out of the Frontier League.

This card was sent to me by Matt, from Heartbreaking Cards of Staggering Genius, many years ago. Until recently, I assumed Josh was a position player because he was wearing Oakleys in the picture. I was a bit off on that one.

According to the Mets website, Josh can hit 98 mph on the radar gun and he is currently on their 40 man roster.

On a side note, I got my first TTMs from Spring Training back today. I got a card signed by White Sox number one prospect, Carson Fulmer, and a card by Nationals number eleven prospect, Blake Perkins.
at 9:31 PM

It's been said that any bettor must watch this,

Watch this or stop placing bets on sports...