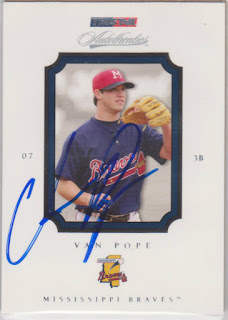 He is a card from the former Braves prospect, Van Pope. I got Van to sign two cards for me in 2011 at an Amarillo Sox game while he was with the Sox. I posted the first card later that season and it can be seen here.

Van had a very good season in 2011, hitting .299 with 10 home runs and 61 RBI. Unfortunately, nothing big came out of it and he was back with Amarillo the next season. He had an off year that season and hit .281 with just 2 home runs and 24 RBI in 53 games. Van called it a career after that season.

About a month ago, I was watching "The Great Food Truck Race" on Netflix when the trucks stopped in Amarillo for a challenge. They had to set up shop outside of the Sox ballpark for a challenge and Van was actually in the episode presenting the winning team with a key to help them out later on in the city. I was probably one of only a handful of people to see that episode and exclaim to my wife "hey, I have his autograph!".
at 10:21 PM