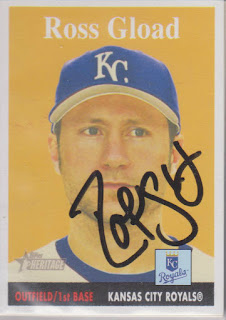 Here is the second card of Ross Gload that I have posted on here. The first one, an '05 Topps card, was posted back in 2011 and it can be seen here. The two cards were signed at the same time in the Royals parking lot in 2008.

The last card of Ross showed him with the White Sox, the third team he played for in the Majors. Originally drafted by the Marlins in the 1997 draft, he played in their system for three seasons before being dealt to the Cubs for Henry Rodriguez in 2000. Ross made his Major League debut that year and hit .194 with a home run and 3 RBI in 31 at-bats that September.

It was back to the minors in 2001 and he stayed there all season, even after being selected off waivers by the Rockies in September. Prior to the 2002 season, Ross was part of a three team trade, ten player trade that involved such players as Todd Zeile and Jeremy Burnitz. He ended up with the Mets, but it was short-lived as they sold him back to the Rockies five days later. He ended up getting 31 at-bats with them that season and he hit .258 with a home run and 4 RBI.

He was traded to the White Sox during Spring Training the following season and spent the entire year in AAA. He made up for it the following year by spending the entire season in the Majors. In his first full season, he hit .321 with 7 home runs and 44 RBI. He had an off 2005 where he hit only .197 in the Majors and he spent a majority of the season in AAA. But, he bounced back in '06 and hit .327 over 156 at-bats.