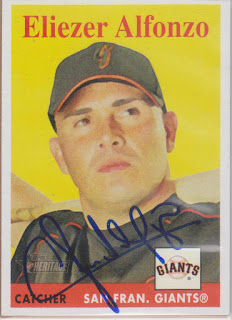 Here is a card that I got signed at a Colorado Sky Sox game in 2011. Eliezer was playing for the Sky Sox at the time and was nice enough to sign two cards for me. I posted the first card about three and a half years ago and it can be seen here.

When I posted that card, it appeared that Eliezer's time in affiliated ball might have come to an end as he had just finished up a season in Mexico. But, he was back in the Pacific Coast League the next season with the Albuquerque Isotopes. That gig, though, lasted only 19 games where he hit .284. The rest of the season, and all of 2014, were spent back in Mexico.

It seems like Elizier's playing days are pretty much over as he did not play last summer. He continues to play in the Venezuelan Winter League, though, so there is always a chance. But, those chances are getting slimmer for a thirty-seven year old catcher.

Sharpie shows up good on that card stock. Congrats Z!