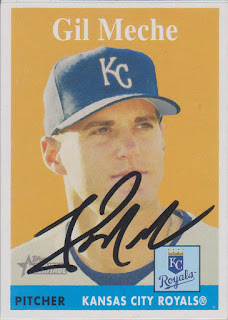 Here is the third card of Gil Meche that I have posted on here and the first one in five years. It is also the first one that shows him with the Royals.

When I posted the last card of Gil, it was prior to the 2011 season. He was entering into the final year of his five year/$55 million contract and he had a torn up shoulder. In that post, I talked about how much integrity he had for what he was trying to do. When he hurt his shoulder in 2010, he needed labrum surgery that would have cost him all of 2011. Rather than have the surgery and sit out the final year of his contract, he elected to pitch through the pain and discomfort out of the bullpen. So, he finished the 2010 season in the 'pen and planned on doing the same thing in 2011.

Then, during the offseason, Gil did something totally unexpected. He retired from baseball. Rather than cash in on one final payday, he walked away from the game he loved because wasn't the same pitcher that he was when the Royals signed him. Since he could not give it his all, he called it quits. Some people may say that he is a quitter for doing that, but I respect him for it. He could have ground his way through sixty innings of relief work that season and got paid heftily for it. But that was not what he was in Kansas City to do, so he turned down the money. You just don't see athletes do something like that any more.