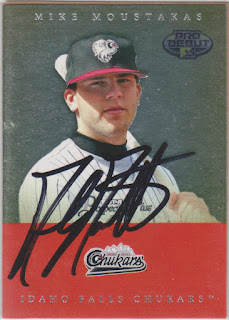 Here is the second Mike Moustakas card that I have posted on here. The first one was posted back in June when I was just getting started on my cards from 2007. Here I am nearly nine months later and I haven't even got to my 2007 Upper Deck cards yet. Five years ago, I thought that I was eventually going to run out of cards to post on here. While that is not ever going to be an issue, it is a little troubling that the newest cards I am posting are almost ten years old. But, that is the format I used when I started this blog and I am a little resistant to change. So, I guess it is going to stay that way for now. Luckily, pack issued minor league cards came back around that time and occasionally I will post a player that is relevant today, like Moose here.

I got this card signed in 2010 at a Northwest Arkansas Naturals game. The NWA Natties, as I call them, are the Royals AA team. My buddy and I stopped there on the way back from the Rickwood Classic and were barely able to get into the ballpark. The Natties play in Springdale, Arkansas which is around Wal-Mart's corporate headquarters. When we got to the game, it was sold out because Wal-Mart bought all of the seats for a huge corporate outing. Luckily, I was able to sweet talk the guy at the ticket booth to sell us two berm seats. Otherwise, it would have been a wasted trip to that portion of the Natural State.

The game sucked as the Natiies got blown out, but I got a decent about of cards signed and saw Moose hit a home run. So, it wasn't a total wash.