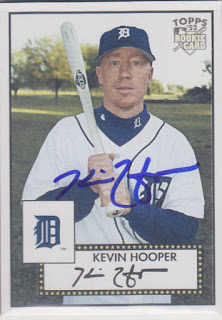 This is, I believe, the sixth and final card of Kevin Hooper that I have to post on here. At least it is the final card until I eventually get into the Wingnuts team sets in the very distant future. This card, like most of my Hooper cards, was signed before a Wingnuts game, the team he managed for seven seasons.

While I am sure that there are a couple cards of Hoop out there that I don't have, I will not be able to get them signed because he is moving on. After seven seasons as the manager of the 'Nuts, Hoop found a position in affiliated ball. He will now be joining the Padres as their minor league infield coordinator.

Hoop played for the inaugural 'Nuts team before moving to the dugout the following season. In his time as the skipper of the 'Nuts, he led the team to a 422-270 record with five straight division titles and one championship. He was also named Manager of the Year three times.

While it is sad to see him go, I hope that he does well and moves up the ranks of the affiliated coaching ladder. Now, the Wingnuts need to find a new manager with some Major League service time so I can get some autographs from him.

Last season, the 'Nuts finally did something extra to showcase their brand around the ballpark. They did that by hanging banners around the concourse. While the banners are not extremely noticeable, they are better than nothing. Here is a banner that was hung commemorating Hoop's batting title in 2008. 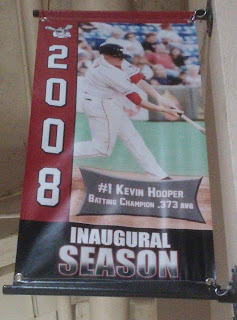