In case you haven't noticed, I've been running a little contest here for the past two weeks that revolves around the College World Series. Nine people have already entered and have a tiny head start. But, it is not too late to get in on the action. There are plenty more points to be earned and no one is even close to locking this thing up yet. So here is all you have to do- fill out a College World Series bracket. 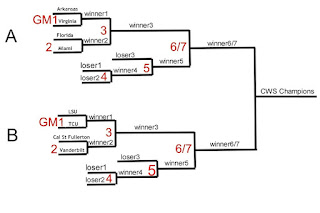 For instance, group A has Arkansas and Virginia squaring off in game 1 and Florida and Miaimi going in game 2. Pick who is going to win each of those games and then those two teams will square off in game 3. The losers of games 1 and 2 will then square off in game 4. Then, the loser in game 3 plays the winner of game 4 in game 5.

If you guess every game right, including how many games will be played in the finals, you can come out with 22 points. As for the prizes, I haven't figured that out yet. It will probably mostly consist of stuff brought home from Omaha.

The CWS begins at 3:00 PM, eastern, on Saturday, June 13. So, all entries must be in by that point. If you have any questions at all, feel free to email me at zman40 at hotmail dot com. Or, just ask in the comments.

Here are the standings through Phase 1

If you think I might have made an error in the scoring, just let me know. I will be happy to look into it.
at 7:40 AM

I think I should have 2. I believe I had Miami right and promoted it, I think in time for the deadline you set. I could be wrong about something, though.

Of course, that point would only bring me from a tie for last to a tie for 2nd-last.

Thanks for the contest!

I got it corrected Wilson. Sorry about that

Last time I messed this up. So here we go. Thank you again

Thanks for the reminder!

Damn, I was traveling and missed this. Sorry! Thanks for a great contest, as always.

Sorry I missed out on the contest this year. For some reason, my son doesn't give me as much spare time as I've had in past years. Hope all is well with you!