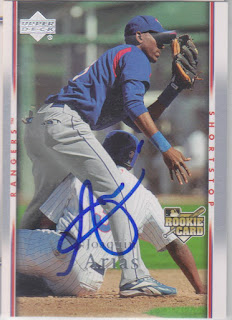 Here is the fourth and final card of Joaquin Arias that I have to post, for now. This one was signed in Omaha while Joaquin was playing for the Storm Chasers in 2011. The first card of him and the third card were both signed at that time. The second card was acquired in a trade with Night Owl sometime before that.

It is kind of funny that the last two cards of Joaquin were signed in 2011, almost five years ago. I put them in my album right next to each other because Ultra comes right before Upper Deck alphabetically. The Ultra card was the only card from that set that I have got signed and this card was the lowest numbered card from this set that I got signed. Since that time, I have not got another Ultra card or a lower numbered Upper Deck card signed from the 2007 sets. Either I am slacking or the sets just seem to lose relevance as time passes.

After playing for the Giants for the past four seasons, Joaquin is currently in camp with the Diamondbacks. So far, he is 2-5 with a run this spring.

For his career, thus far, Joaquin is a .265 hitter with 7 home runs and 95 RBI. All of the dingers and most of the RBI came while playing for the Giants. Besides the Rangers and Giants, he had a brief stint with the Mets in 2010. Joaquin's best season was 2012. He had career highs in games and at-bats and responded with a .270 average with 5 home runs and 34 RBI.
at 8:07 PM