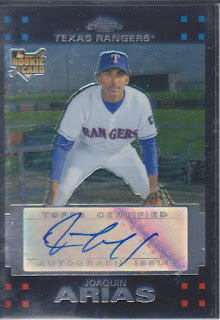 Here is a card that I obtained in a trade with Night Owl about eight years ago. Night Owl posted this card on his blog after he pulled it from a pack. He had no interest in it and offered it up to anyone that wanted it. Since it had a signature on it, I thought I needed to have it. So, we worked out a trade and I sent him a Rafael Furcal jersey card for this one.

This is the second card of Joaquin Arias that I have posted on here. The first was posted in 2011 and it can be seen here.

When I posted that last card of Arias, he had just completed a season with the Omaha Storm Chasers. It was the first time in four years that he did not play in a Major League game. That all changed the next season when he got called up by the Giants. He was a member of the team through this past season. After his year in Omaha, I just figured that he was a AAAA type player, but he proved me wrong.

Since he went on to play for the Giants for so long, I am sure that Night Owl was quite happy that he got this card out of his collection.
at 2:59 PM