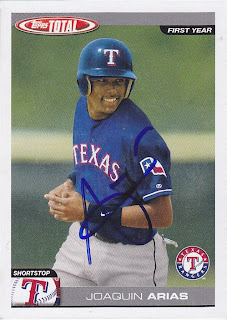 Here is a card that I got signed in Omaha over the summer. Actually, my buddy, Dustin, got this one signed for me. That's right. If you go to a ball game with me, I'm probably going to put you to work.

In Omaha, both the visiting and home clubhouses are located behind the right field fence. Therefore, both teams take the field from the same spot. To make it easier on myself, I put my buddy in charge of graphing the home team and I took on the visiting team. It only took a couple of minutes to realize that Dustin was not quite up to the task of identifying players, asking them to sign, and then finding the cards of that player. So, to take a little burden off of him, I took on the identifying and asking part and Dustin just had to worry about finding the cards.

The reassigned tasks were working out great until Joaquin Arias came out. Just as Joaquin appeared, I realized that I had let Spike Owen get by me. Since Spike was with the visiting team, I asked Joaquin to sign and then ran over to where Spike was signing. I get over to Spike and was waiting for an autograph when Joaquin came up to me to sign. Dustin was still in his original spot, so I had to explain to Joaquin that that was the guy that needed his autograph. He had a confused look on his face, but went over and signed all three cards without any complaints. I must say that I'm not used to having players track me down to sign for me.

I have no idea what is going on with Joaquin's signature. He might be pulling a Joakin Soria by only signing his last name.
at 8:40 PM

Ha, sounds like you confused Joaquin a bit, but at least you got both players' autographs.