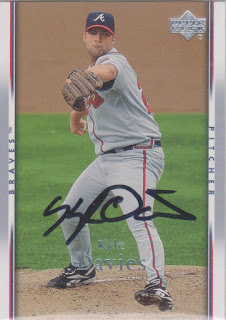 Here is one last card of Kyle Davies as a Brave. The last card of Davies I posted, an '07 Topps card, featured him with the Royals. At the trade deadline in 2007, the Royals obtained Davies in exchange for reliever, Octavio Dotel. Dotel would pitch in 7.2 innings with the Braves while Davies played in Kansas City into the 2011 season. For better or worse, I would say that the Royals got more out of that trade than Atlanta did, especially after missing the playoffs that season.

Royals GM, Dayton Moore, came over from the Braves organization and, through the years, has brought over a few former Braves. In the earlier years, there was Davies, Wilson Betemit, and Jeff Francoeur. It is kind of strange that Dayton has been with the Royals for a solid decade now, yet he is still bringing over reclamation projects from the Braves. Over the past two years, he has brought in Kris Medlen, Peter Moylan, and Mike Minor, with Minor and Medlen both coming off of Tommy John surgery. You would think that over that much time, he would have less ties to the Braves. But, being a small market team, I guess he just looks for any advantage he can get.

As for Davies' time with the Braves, he pitched there for two and a half seasons and went 14-21 with a 6.15 ERA. He wasn't much better with the bat as he hit .141 with two dingers and 9 RBI. His home runs came off of Aaron Sele and Randy Wolf.