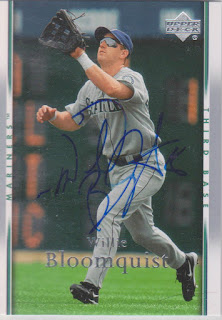 Here is the third card of Willie Bloomquist that I have posted on here. I posted his '07 Topps card back in November and a minor league card back in 2010. Those first two cards were signed at Royals Fanfest in 2009. This one, on the other hand, was obtained outside of Kauffman Stadium in 2009. There was a slight mist that day and that precipitation affected the outcome of the signature on this card. There are two spots where it got wet. One looks like it got hit with a drop and the other looks like the Sharpie ran through a wet spot. Luckily, it did not do too much damage as you have to look for it to see it.

When I posted that last card of Willie, I speculated that his career may be up after getting released from the Mariners last season. It appears that is actually the case after Willie announced his retirement last week on Twitter. It was a cool Tweet that showed Willie taking a swing in batting practice. He hit a dinger and walked out to a bat flip. It read "Make your last swing your BEST swing. Farewell @MLB. Thank you for 14 amazing seasons. It's been an incredible ride".
at 1:59 PM