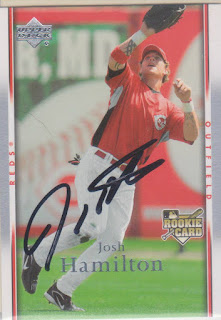 Here is the third and final card that I got signed by Josh Hamilton at a Rangers game in 2008. You can see the first card here and the second one here.

When I was making that trip to Texas, the only cards of Josh that I could find were two 2007 cards and an older card of him with the Devil Rays. I know for a fact that I had his 2008 Bowman card of him which showed him as a Ranger. But, I was unable to find that card. I, of course, found it a couple of weeks later which is usually the case for me when I cannot find a card I am looking for. Since I always take three cards per player, I try to mix up the teams as much as I can if the player has been around a bit. One Rays, Reds, and Rangers cards would have been perfect at the time, but I screwed that up, especially since the Rangers are the team that Josh is known for.

So far this year, Josh has missed all of Spring Training with an ailing knee. He had two operations on it last year and is still trying to work himself into game shape. As of right now, he is hoping to be back in early May.

When I went to Josh's MLB page, I did not recognize him. His profile picture on there has him sporting a three inch long goatee.
at 10:00 AM