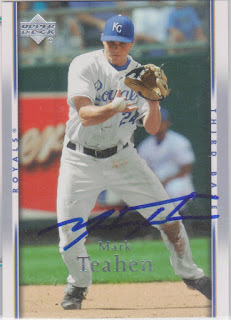 Here is a card of former Royal, Mark Teahen, that I got signed outside of Kauffman Stadium in 2008. If my records are correct, he signed two for me that day.

This is the second card of Mark that I have posted on here. I posted the first one, a Bowman card of him with the A's, in 2010 and it can be seen here.

In 2004, Mark was part of one of the worst trades in Royals history. Prior to the All Star game that season, the Royals dealt Carlos Beltran to the Astros in a three team trade with Oakland. Beltran was in the last year of his contract and the Royals knew they had no chance of resigning him. So, they made the deal and got Teahen and Mike Wood from the A's and John Buck from the Astros. While Teahen and Buck were very good players on a bad Royals team, neither one of them came near to being the player that Beltran was at the time. It also says something that Beltran is still playing while the guys the Royals got in return have been out of the game for at least one season. And Beltran is at least three years older than the other three guys.

But, that was how the Royals operated back then. Luckily, that has changed a little bit.
at 7:58 PM