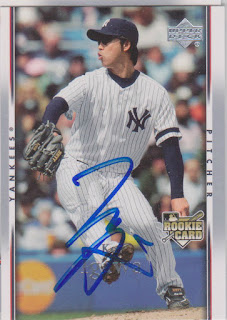 Here is the third and final card that Kei Igawa signed for me in 2009. Kei was playing for Scranton/Wilkes-Barre at the time and he signed the three cards for me while in the stands charting pitches. You can see the first card I posted here and the second one here.

Instead of pitching in Yankee Stadium, Kei spent most of his time in the U.S. pitching in PNC Field in Scranton. He spent the majority of five seasons pitching for the SWB Yankees and he did okay with them. He was 33-22 in AAA with a 3.81 ERA. Over 469.2 innings of work, he struck out 373 while walking 136.

After the failed experience with Major League Baseball, Kei went back to Japan and pitched three more seasons in their Pacific League before calling it a career.