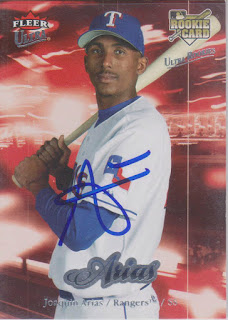 Here is the second of three cards that were signed by Joaquin Arias at an Omaha Storm Chasers game in 2011. Joaquin was playing for the Chasers at time and he signed the cards before hitting the field.

By the time this card came out, Fleer, as we knew it, was gone. The company basically filed for bankruptcy in 2005 and the name was purchased by Upper Deck for just over $6 million. Upper Deck put out some sets under the Fleer name in 2006 and '07 before killing off the brand for good in 2008. This set was one of the last ones made by Upper Deck.

By Ultra standards, this set looks like it could have been put out by Fleer. I have a hard time telling many of the Ultra sets apart because they all look so similar. They were usually a borderless card with some kind of foily name on the bottom portion of the card. This set certainly fits that description. This card is from the rookie subset and that is why it has the crazy-colored background. The normal cards from the set where not like that.

I will have another Joaquin Arias card posted later on today. It is not often that I have back-to-back posts for the same guy. But, today happens to be one of those days and I'm am going to knock them out at the same time.
at 1:50 PM